The British artist DJ Simpson has developed a singular and remarkably consistent series of paintings over the last dozen years. These works have been based on material processes of cutting into panels that are usually made of laminated sheet materials. Simpson’s investigations of this process – known as routing – which cuts into a surface and removes a layer of material, have been painstaking and highly inventive. Simpson typically applies the routing technique to a variety of manufactured sheet materials, including aluminium, plywood, Formica and Plexiglas.

Whereas in a conventional painting one takes a canvas surface and adds materials to it, Simpson’s work – by contrast – begins with a finished industrially made surface and then removes material from it. It is the freshness of this subtractive approach that enables him to enter some of the most fraught arenas of modern painting and to perform there in new and surprising ways.

In more recent projects Simpson has moved on from using readymade surfaces, becoming more involved with the process of manufacture, e.g. designing wallpaper as part of an installation first shown at Bloomberg SPACE, London, 2009. He is currently working closely with specialist architectural cladding fabricators to produce his first large public commission for an open-air structure, using punctured anodised aluminium. In a new group of works, DJ Simpson initiates a further phase in his distinctive painterly investigations. Simpson combines powder-coating (an industrial process used for painting products such as car bodies) with simple hand-folding of thin aluminium sheets. This allows him to combine a sense of

intimacy with a certain industrial facticity. A basic thread throughout Simpson’s practice is one of reflecting on the qualities and behaviour of materials and material processes. Simpson’s reflection on material processes takes place in dialogue with modern painting. His completed works (as well as a number of necessary uncompleted or rejected experiments) are the fruits of these reflections. This is not exactly the same as what was once known as ‘Process Art’ – which one would associate with examples such as Robert Morris’s 1969 Continuous Project Altered Daily , or e.g. works by Lynda Benglis made with poured latex, or by Richard Serra using tossed molten lead. So it may be helpful to spend a moment thinking about the difference between Simpson and the process art of the 1960s and ’70s. Robert Morris, who was influential both as artist and as theorist, believed that there was a deep problem of ridding art of anything that was arbitrary. In Morris’s opinion (as in his essay ‘Some Notes on the Phenomenology of Making: The Search for the Motivated’), one major advantage of ‘process’ – meaning the behaviour of materials when left to their own devices or subject to their natural inertia - was that its resultant forms (or formlessnesses, if you prefer) were supposedly non-arbitrary. They were considered non-arbitrary because they were the raw effects of, for instance, gravity upon a particular material. With that in mind, it becomes clearer that there are several fundamental differences between ‘classic’ process art and the approach of DJ Simpson. First of all, Simpson is not much bothered about some appearances of the arbitrary in his work. The lines and marks on the surfaces of his works are arguably arbitrary in form, and are more a means of indicating occupation, habitation and atmosphere than of marking visual structure. Secondly, Simpson’s work never quite presents a single material process in isolation; instead, it tends to collide together two distinct and normally unrelated processes – as in the hand-folding of aluminium plus powder-coating here. This collision is often at the core of the work and is usually surprising. What’s more, by bringing together distinct processes, as in the combination of sheet lamination and routing in his early work, Simpson indexes industrial history more than any sense of chemical processes. Thirdly and finally, Simpson understands process not – like Robert Morris – as a kind of materialist other to the artifices and conceits of art and culture, but rather as a continuum in which art merges experimentally with technology. Process for Simpson is inherently technological and therefore historical.

Viewed from that perspective, the decision to combine the powder-coating process with simple hand-folding of thin (1mm) sheet aluminium is highly evocative. It puts together two processes that stand for a maximum and a minimum of technological sophistication. This duality is also a way of indicating distinct moments in technological (and therefore human and social) history. For the powder-coating the panels must be removed from human touch: part of the process involves heating the panels to high temperatures. It is in the folding that the hand re-asserts itself and this helps to introduce a decisively anti-rationalist tone. Simpson’s work reminds us that the separation of art and technology is a relatively modern notion. His work twists the instrumental logic of the technical against itself in a way perhaps not unlike what the philosopher Giorgio Agamben called “means without ends.” Indeed, much of what is fascinating in Simpson’s work is precisely the difficulty of saying how, why and whether something is done for rational-instrumental-means/ends reasons or whether instead an outcome results from irrational-non-instrumental-ends/means motivations.
John Chilver 8/5/2011 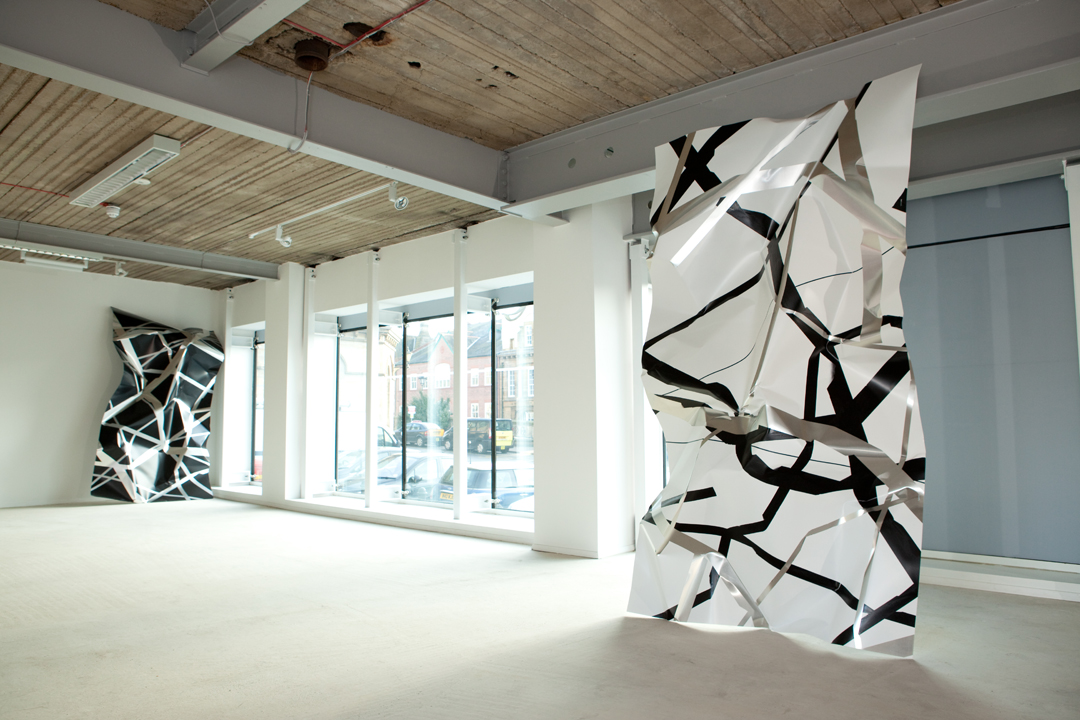 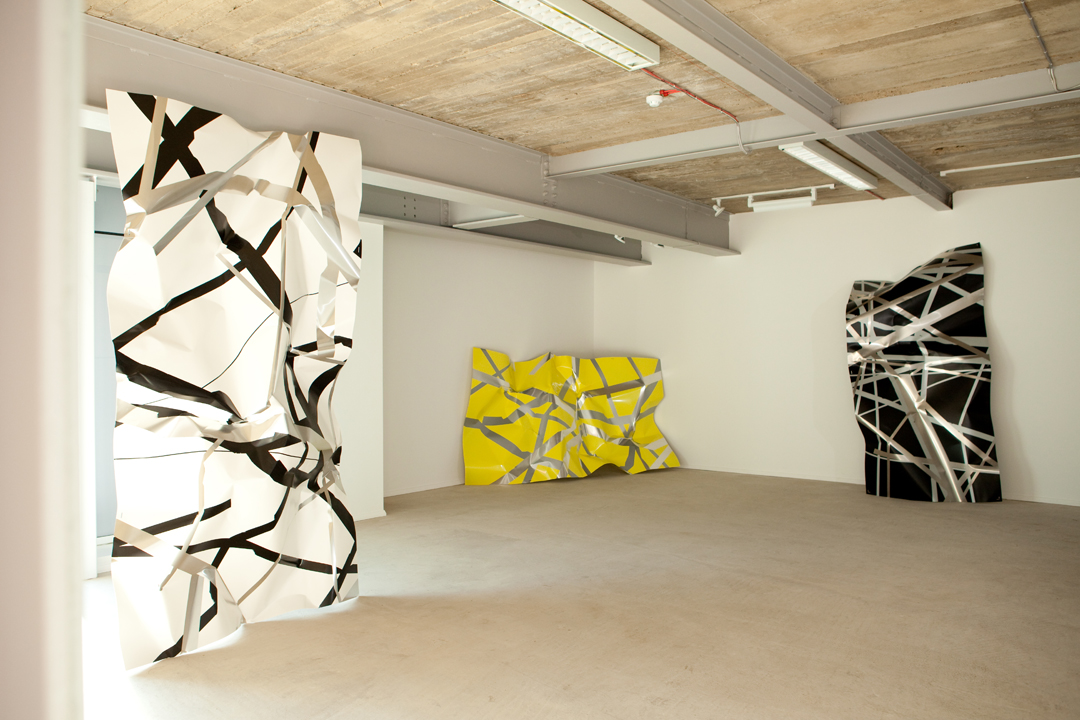