Gutter Words is a complex book work and the culmination of a 10 year enquiry which aims to explore the sculptural space of language, the book and its physical connection to the body. The written word and the book are mediated through an array of linguistic, design and typographic conventions which act as the safeguards to a tightly managed experience. Omnipresent is our compliant respect for these conventions as we navigate through an encounter and are directed to read. Gutter Words attempts to draw attention to the potential that these conventions have to rupture, offering a less defined but perhaps more intimate experience.
The critically successful ‘Reading as Art’ exhibition at Bury Art Museum in 2016, presented works by artists such as Martin Creed, Kenneth Goldsmith and Eugen Gomringer, which investigated the potential of reading as an act of making. Gutter Words, 2016, a site-specific work by the artist Jo Hamill, was also included. It was one of a number of iterations of the same work which form part of a sustained investigation by the artist into the material and sculptural potential of language. Working with an edition of James Joyce’s Ulysses, Hamill systematically obliterated the words of Joyce but carefully retained those words positioned closest to the gutter – the technical term used to describe the central margin of a bound page. The retained fragments formed two extended columns, these were then sited in the ‘non-space’ of a corner within the Bury gallery space.
Whilst Hamill’s practice of making is reminiscent of the abstract restrictions and disruptions employed by Oulipians such as Raymond Queneau and George Perec, it extends the notion of restriction and disruption to the space in which the work is viewed. Here in her minimal intervention Gutter Words, 2019, an installation at Platform A Gallery, Hamill continues to explore how the ubiquitous fabric of a space or the ‘non-spaces’ can be ruptured by language and viewed in the way that one might view a physical sculpture.
Gutter Words, is also presented in the form of a book. Hamill explores the relationship between the book, as a sculptural space and the role the body plays in activating this physical space. Notable here is how design and typographic terminology is so entrenched in bodily references. Header, footer, body-copy, the arm of a ‘K’, the crotch of a ‘Y’, the foot of a ‘T’, the ear of a ‘G’, the shoulder of an ‘R’ and so on. As is the architectural scaffolding of Joyce’s schema which underpins the structure of Ulysses; kidney, genitals, heart, lungs, esophagus, brain, blood, ear. etc. Lawrence Weiner refers to language as material for construction, the act of deletion in Gutter Words exposes the architectural scaffolding that holds words in place. Voids are physical spaces to be read and words become unanchored, set adrift in an uncertain space. 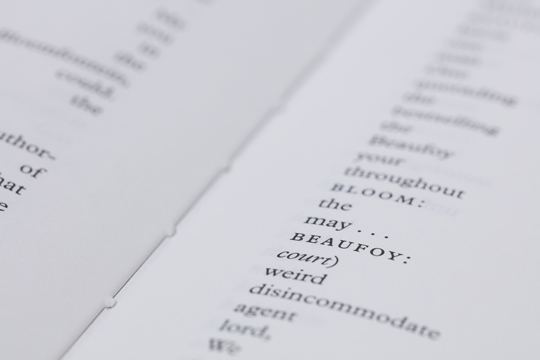 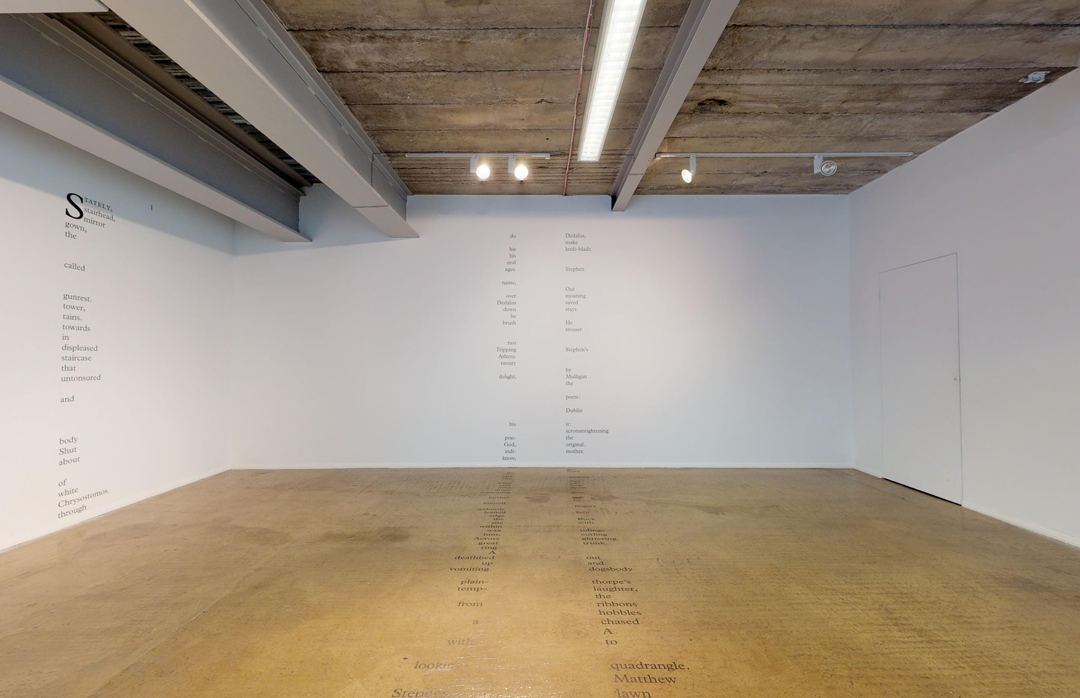