Repeated patterns of existence are mesmerisingly submerged within Francesca Simon’s current paintings. The recent series of hinged triptychs is inspired by looking down at the world, noticing both the elusive and the systematic. She observes angled foreshortened combinations of geometric patterns, perhaps on tiled church floors (such as the Borromini pavement at San Giovanni in Laterano) or the rough designs and articulations of slanting or vertical stones in dry stone wall boundaries in the Yorkshire Moors. Simon is able to make fine archaeological judgements in relation to the adaptation and understanding of these disruptions and patterns. She observes the world with precision and logic, allowing the personal to interweave with the potency of illusionistic experience which then resurfaces in her paintings.

“In Yorkshire I am always walking, which means looking down; I notice things on the ground … fossils, stones, even adders. It was the topographical patterns of the drystone walls, unwieldy irregular grids on the landscape, enclosing desaturated greenery, which first drew me to abstracting from what I saw around me.”

This kind of almost numinous identification with the landscape is significant factor in the making of her work. On her many walks in Yorkshire Simon might notice the stitching of fields together through the innumerable congregations of rock forms, pierced openings for livestock, the angles and curves of sections of dry stone walls, which perhaps mark a space or dwelling, or an erasure of past habitations. Perceptions of texture, weight and erosion, the wear and tear of centuries of harsh northern weather, start to permeate her thoughts and introduce themselves into the compositions and drawings. You slowly begin to register the way things lock together, a kind of mapping or trace of her journeys.

The identification with a particular place seems always carefully interwoven with a continuing strategy of reiteration. A routine is developed through the drawing of underlying grids. Here the isometric forms are drawn directly onto each panel with near geometric certainty. The sum of these actions begins the gradual accumulation of a spellbinding set of illusions.

Speaking to Simon recently in her studio, she describes how (though she is not always sure what will happen) she continually sands back subsequent gesso layers over the entire surface of each work to reveal what is beneath. In this way her approach is open, the physicality of the revealed grounds acknowledging a personal history.

In Als ich kann, 2017, for example, the method of sanding and abrasion, through the acrylic, linen and wood, seems evocative of deeper memories. We notice the subtle flecks and a sparkle akin to the use of charcoal. Diamond shapes, painted in thin translucent washes, hover alongside ‘kite’ structures over a mysterious built-up substructure. The false symmetry creates myriad densities, and the sensation of a ‘falling’ movement, perhaps with the intention of destabilising the viewer.

"Geometry can play pretty serious tricks on the mind and that fascinates me."

Simon’s approach is always to pare away the unnecessary, to strip back to the essence, to impose restrictions on her own use of colour or shape or repetitions. A particular specificity of colour is developed with clarity and intensity in Alien Logic, 2017. The black kites, like the English red in its counterpart painting Als ich kann, echo strong associations with the swirling optical floor designs in the Accademia in Venice. This concentrates the mind on the importance of value systems; systems for controlling eye movements or predicting connections. Simon wants us to rethink how we process paintings, through memory, emotion and cognition.

This kind of shifting oscillation calls to mind the multi-panelled paintings of Robert Mangold. Mangold’s interest in early renaissance fresco paintings with their play of light and shadow seems to resonate with Simon’s thinking. In writing for Art Forum in 1974 the critic Joseph Mascheck pointed out that Mangold had been making painting as though moved by constructive doubt. Later, in his Attic series, 1990, Mangold used irregular quadrilaterals to construct his large scale eccentric compositions. The variegated mottled tones on masonite or plywood grounds engage peripheral vision, shifting the eye from the seam made by the adjoining panels, from one form to another. Mangold thinks through his worked colour studies on paper setting up what Mascheck calls a humanist geometry.

I am immediately reminded of Simon’s earlier works such as Leviathan, made in 2015 for her exhibition ‘Navigations’ at the Ryedale Folk Museum. Simon starts by choosing three parts in response to the breadth and textures of the landscape of the North York Moors. The use of repetition exerts a definite and continuous sense of movement and propulsion. The precisely taped-off triangulation at one end of the painting protrudes into the edge of the field of vision, signalling the notion of an edifice or the exterior of a building, the gridded devices and deceptive flatness creating illusory space, and one that points to her recent multi-panels.

A differing process takes place in the construction of the hinged triptychs such as After Campin 2, 2017.This is a key work in terms of construction. Simon based the work on the Flemish Renaissance painter Robert Campin’s Mérode Altarpiece, The Annunciation Triptych, in the Metropolitan Museum of Art. Simon’s drawing (at thirty degrees) is reductive and begins an elastic transformation.

In Campin’s hands the central panel is a depiction of a middle-class room in which the Annunciation takes place. There is a typical settee (common in the Netherlands at the time) which the Virgin leans against. Clutter and religious symbolism fill the interior: lilies symbolise Mary's virginity, rays of sunlight at the top left of the painting highlight the scroll and the book, representing both the Old and the New Testaments. Simon leaves all this out and its airiness is key to the painting’s success. The viewer registers the black and white elevations first as roofs then rooms, which produces a tension between the mechanical and symbolic relationships. This work, and also After Campin 1, 2016, suggests perhaps the spatial matrix of a future city in its feeling of newness and virtuality.

The shifting saturated compartments of colour draw the viewer in. Simon likes to use oxide browns and Indian reds, played off against Prussian blue, and warm grey in equal measure. Balancing the hierarchy of colour across the three panels in architectural combinations is difficult, but here Simon explores a system of possibilities in the placement and distribution of the architectural and pictorial. Simon gives the donor and his wife in the left hand panel a four-colour combination. The Indian red and Prussian blue denote status and sit intimately inside the projected space. The near sided parallel projections in this case are black and white, as is the elevation above.

I particularly like the right-hand panel. Campin portrays St Joseph working as a carpenter, and it keeps catching my eye, maybe Simon’s as well, as it seems to have greater depth, possibly through the colour mixing. Simon combines Prussian blue with touches of nickel azo yellow and a mixture of oxide brown.

"In the After Campin paintings I was deliberately attempting a transcription. This is different from my usual process which relies on the subconscious filtering of visual memories; time elapses and eventually, unforced, an echo of the original visual experience emerges, usually a close relation in terms of shape and texture."

Lateran 1 and Lateran 2, both made in 2016, hinged triptychs, painted straight onto the birch ply support, owe something to the constructive domain explored in the work of Lygia Clark, particularly in her understanding of collage: that

inherent sense of visual experimentation, the artist playing with form or altering the line and perspective. These operations seem to lie at the core of Simon’s concept of structure, and the way she develops divisions of colour both achromatic and chromatic.

When Lateran 2 is open and flattened to the wall a more constructive relief is revealed in the horizontal rhythm and modulation of movement. The power of the smoothed slightly translucent flatness is a key emphasis. But on closer inspection the sanded areas of gesso in between increase the illusion of depth and space not only through emotive textural characteristics but through a hermetic sense of geometry that persuasively suggests an eerie constructional effect.

Lateran 1 has a strange mixture of privacy in a public space within the layers, transparencies and overlays of colour. There is a feeling of an eruption of activity as rhomboid forms pulse inside the isometric structures. The illusion made by the architectural elements pushes right forward and slips back into space. We can see that the transparency and overlays are made to be seen both flatly and half opened, as there is a choice to be made about the how the work can be shown.

The temporal concerns and the invitation to the audience to take part in that unhinging feels part of the concept for the show. Each manoeuvre has its own duration or unfolding co-existence of past and present. I find myself thinking of a relationship with The Wilton Diptych. This painting feels fundamental to the exhibition in its portability and devotional context; and is an inspiration for a more direct transcription in one of Simon’s earlier paintings, Tunnel Vision 2, 2015. The altar piece depicts a strange encounter between the imaginatively real and something beyond the visible, alluded to perhaps in Simon’s painting in the juxtaposition of flat white paint and translucent white washes in the winged forms.

That kind of haunting complexity is scaled up in Ghost Logic and Ghosting both made in made in 2018. These works have an odd sense of location and unexpected surface tension. Simon works over the ground of these larger works with vigour, allowing the viewer to sense her struggle, her physical engagement with the canvas. Thin grey washes catch in the fissures of sanded gesso and accentuate a primitive engagement with the materials used. But the scale of these works pays dividends. In each painting she inserts a rectangular structure, an inner frame within the composition, higher up in Ghost Logic, almost suggesting a stooped figure (Christ carrying his cross perhaps?); lower down in Ghosting where the black and white composition creates a more foreboding, almost sinister, atmosphere.

There is a sense of everything becoming much looser; the grids and overlaying composition do not resist a figurative interpretation. Francesca Simon understands the way things can be left more open, as her rationality combines instinctively with the geometry’s physicality consolidating the whole effect as a single entity. 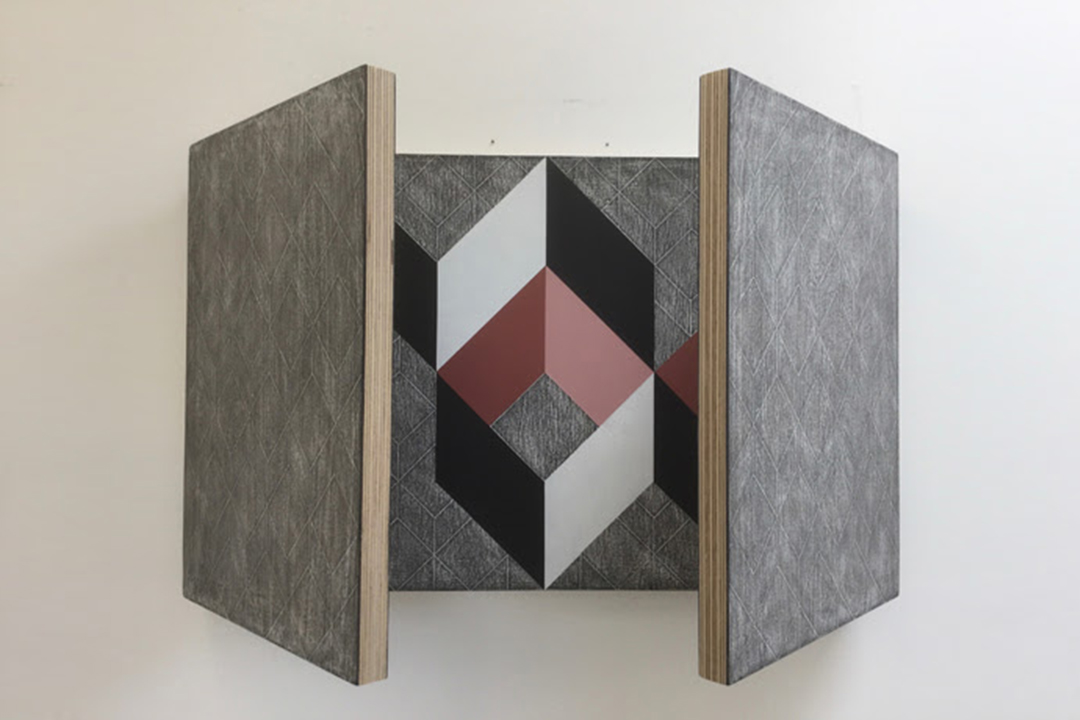 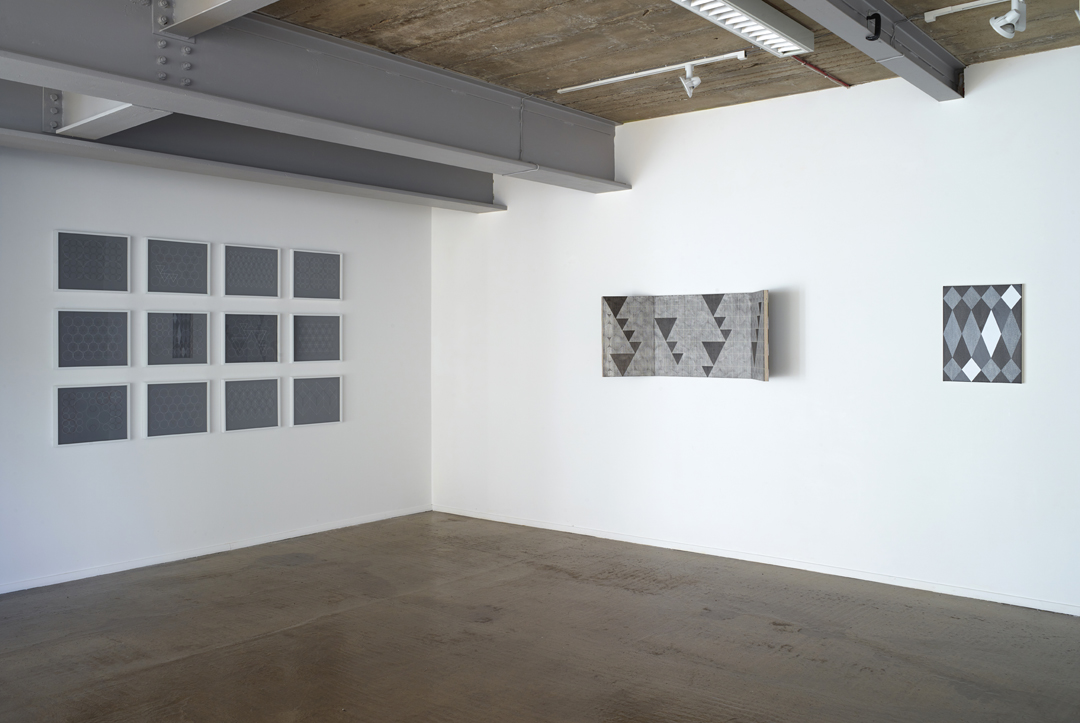 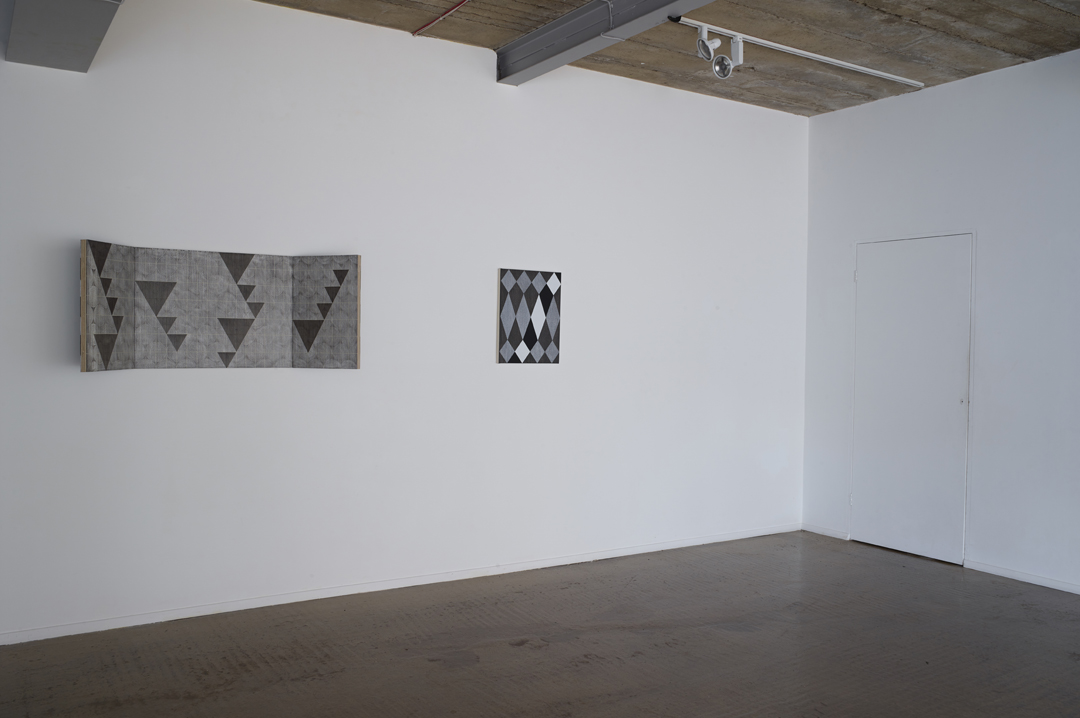 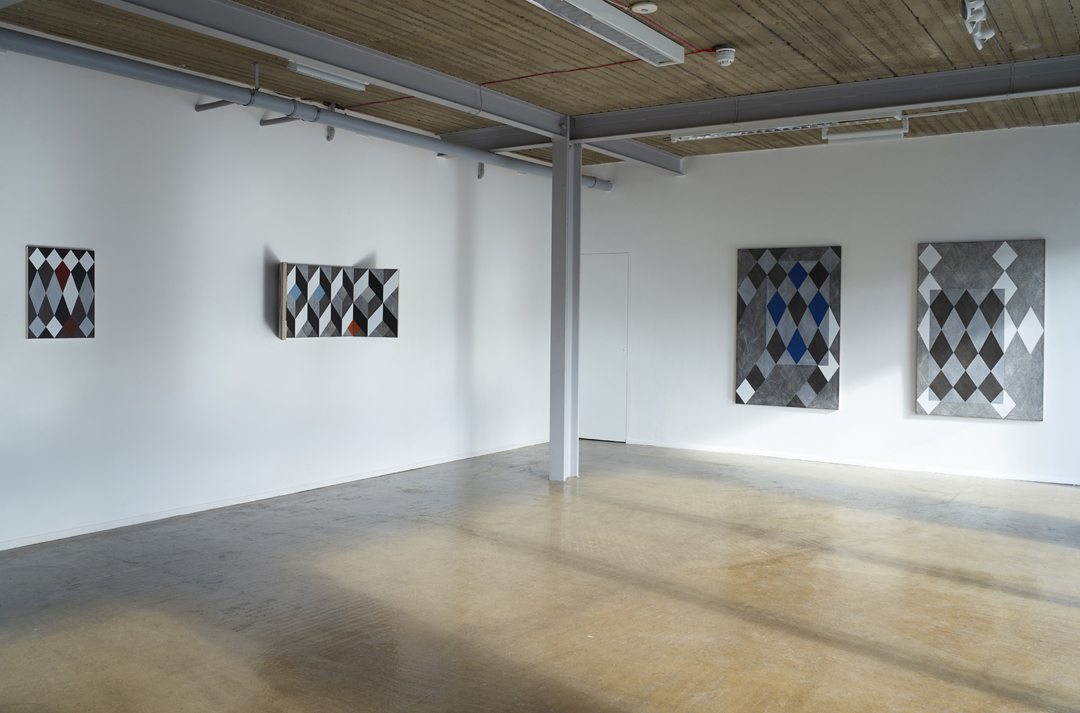